free shipping on all orders. 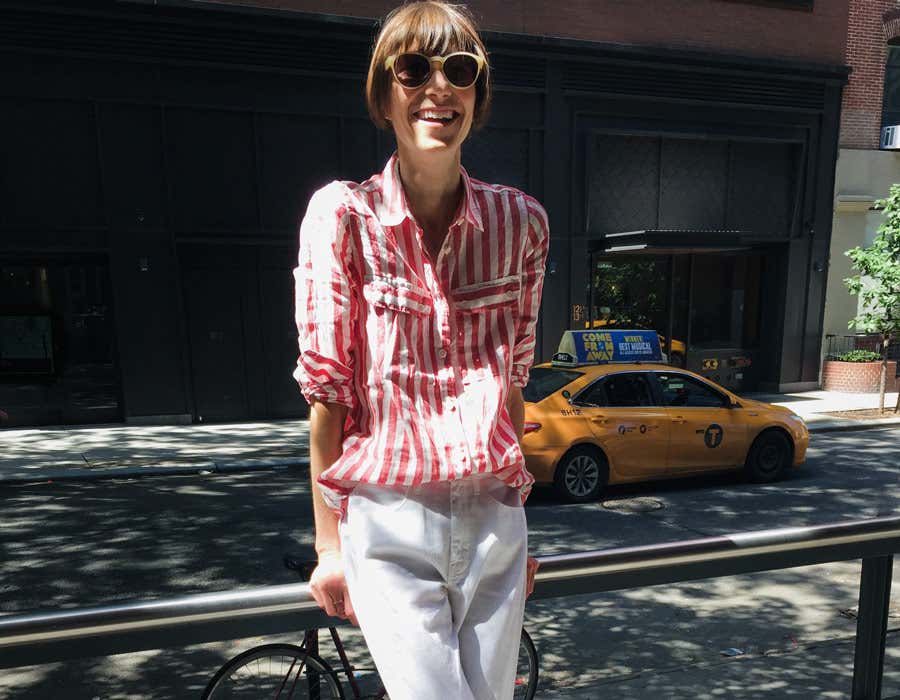 In our new series, we are profiling women who inspire our brand -- with their strength, their passions, their joie de vivre, their je ne sais quoi. Kicking it off is New Yorker Laura Neilson, a writer of all things of interest (or at least we find interesting): beauty, fashion, style, food, design. We cherish her humor, her intellect, and her swift and incisive pen. In short, she's an inspirational rockstar, so read on.

Writer Laura Neilson shares her beauty and fashion must-haves, her best (and worst) interviews and why she wanted to be a secretary when she grew up.

Are you a born and bred New Yorker? I was born in the city. My parents had just bought this big farmhouse upstate. My mom went into labor there, then they drove down to the city to have me. And they hit an animal.

Like, a deer? I think it was a raccoon. It took a light out.

That’s pretty adorable. I remember my mom saying, “Well, if it’s really about typing, there are lots of other things you can do, too.” I remember her being careful not to discourage the secretary idea, but to be open-minded about it. After I graduated, I  joined a program at Random House where they rotate you around to all of the different areas--marketing, publicity, editorial. Then once you have a feel for everything, they let you apply for the job you want as they open up. I spent about two years there, but I always knew I wanted to do editorial, so I started freelancing. I figured I’d try it while I waited for the next editorial job to come my way.

And you’ve done beauty? I used to cover backstage beauty reports for T Magazine, but beauty isn’t really my beat, it doesn’t come naturally to me. I really love fashion. I really love interviews and profiles.

Why? I just love talking to people and getting their stories, regardless of the industry.

Who was your most memorable interview? Anna Sui was pretty memorable because I made her cry.

What did you ask her??? Okay, it was right before Thanksgiving and she was really reluctant to come out of her office and do this because I think there was something under her eye she was sensitive about and it being visible. I was so excited to interview her because back when I was 11 or 12, I was really into sending fan mail to my idols, and a lot of them were fashion designers and models. I wrote to her, Isaac Mizrahi and Cynthia Rowley. I’m sure there were others, but those three wrote back, handwritten on their own letterhead. And Anna’s was in that classic signature purple. She wrote, “Hey Laura, it’s so cool that you like music and the Beatles.” She had obviously read my note and her reply was so personal. And of course, I kept it. So I had it in my lap, waiting to tell her after the interview, or maybe not because she was skittish about even being there. But somehow during the interview, she told me that she had written a letter to Irving Penn telling him, “I want to be in fashion, I want to be an artist and do what you do.” And he wrote back to her.

So it came full circle. Yes. She became friends with his daughter, and when she met him, she got to tell him that his advice really influenced her. She said, “It’s funny how those things really resonate.” Meanwhile, this letter is BURNING in my lap. So when the interview was over, she was trying to go, and I said, “I want to show you something.” I handed her the letter, and she read it and she started to cry. She said, ‘You just never know where these things end up and if they even make a difference.” And that has always stuck with me.

Very cool story. Is there a worst interview that comes to mind? I had one that was so bad, I had to hang up the phone and pretend we got disconnected.

Would you share? I’ll go first. Mine was Edie Falco. Ok, you go. Do you know the design maven Holly Hunt?

I know Holly HuntER…Wait. Is that who you thought you were interviewing? (pause) (laughter) I was writing for Design Bureau magazine and my regular editor was on maternity leave, so the guy who took over was like, “Hey, Laura. Last minute. Can you do this interview about a collaboration between this design team and Holly Hunter? We can’t pay you a lot but you get to interview Holly Hunter.” And I was like, Okay, Lenny Kravitz had just done a collaboration with Kartell; Holly Hunter’s doing a design collab. But if you’re deep in the design world, you know this woman Holly Hunt. I didn’t. So, I’m on the phone with this woman…

Asking about “The Piano” and “Broadcast News…” Well, she’s also Texan, so she had a similar accent to Holly Hunter, which didn’t help. I think the interview had been going poorly, anyway, and about halfway through, I asked, “So, is this your first foray into design? What made you want to do it? And why now?”  So she said, “I’m sorry, is there something wrong with you?”  And at that point, I was furiously googling all these names she was mentioning that I didn’t know and then the name Holly Hunt came up JUST as she asked me if there was something wrong with me.

So, what did you do? I hung up the phone, then I emailed her quickly and told her we got disconnected. I finally called her back ten minutes later.

And did you salvage it? Yes. And I never fessed up.

How do you know Matthew and Andrew? We actually met through my parents. I remember coming home one night, and my dad said, “Do you know these guys? They’re a gay couple and they make soap.” I said, “Okay, you basically just described every gay couple who moves up here.”

Then I went into our bathroom and there were Malin + Goetz products everywhere. They used to live down the street from my parents, and Ifinally met them at my family’s Christmas party in 2010. I remember thinking, I wish I knew them when I was a teenager. But then again, they wouldn’t have wanted to hang out with an annoying 13-year-old.

I disagree. I feel like they’re curious about kids. Can’t you just see Andrew and Matthew sitting down next to 13-year-old you and asking, “What do you do for fun, you precocious teenager?” My mom calls Andrew Mr. Bon Vivant. And I call Matthew my Skin Whisperer. He is so self-aware and honest. I’ve been lucky enough to have the occasional date and car rides upstate with him and I love those times.

You have inimitable style. Who’s your style icon? Joan Didion or Katherine Hepburn, my dad and John Lennon. I kinda like British schoolboys.

What’s your beauty obsession? Hmmmm. I brush my teeth a lot.

Do you wear makeup? I do wear makeup, but I never really got makeup lessons, or practiced applying it. My mom is kind of a minimalist so I was never well-schooled in that craft.  A beauty obsession lately has been just overall good skin care in general, so I can keep up this minimalist makeup-free schtick of mine for as long as I can. So: eating well, using more natural products/ingredients, getting a decent night’s sleep, drinking water…Also going hand in hand with that minimalist sensibility, I’m always trying to streamline my routine. Since I’ve gotten older, I’ve been annoyed by how much more time I spend in the bathroom putting crap on my face!

Fashion obsession? I’m a little shocked that I don’t seem to have a go-to fashion item, that one thing I’d grab in a fire. But as far as standby pieces go, I found Feiyue Kung Fu Shoes in Chinatown years ago and have been wearing them ever since. They’re martial arts shoes, so they’re super lightweight and have no arch support, but I think they look so chic and even a little European. I buy them in bulk! High tops, low tops, white, black...

Favorite smell? I have a few. Toast. Baking bread. And the backs of bunnies’ heads. I grew up with bunnies, we used to have a lot of them as a kid and I used to love smelling the backs of their heads between their ears.

What fragrance do you wear? I’ve been going back and forth between really cirtrusy and really woodsy unisex fragrances lately. Right now, I’ve revived Demeter’s Earl Grey tea, which is bergamot. It’s just the bergamot. Also, Onsen from Min Fragrances. It’s inpsired by Japanese hot springs. It’s smoky and charcoal-y and really strange and dark and masculine and I love it.

Favorite way to spend a day off? Coffee, the paper, back in bed, go to Lafayette on my bike and finish reading the paper at the window.

Oh, I assumed it would be spent in the country. For every weekend spent upstate, I need a weekend back in the city. It’s like a relationship; I feel I have to put the time in. Too many weekends out of town and I feel strangely disconnected from the city.

What are you reading these days? The J. Peterman catalog. It’s the best goddamned read ever. It’s still illustrated, and the copy is so good. A while ago, I tried reaching out to find out who writes it, what’s going on over there. But they’re a privately owned company, so it’s tricky.