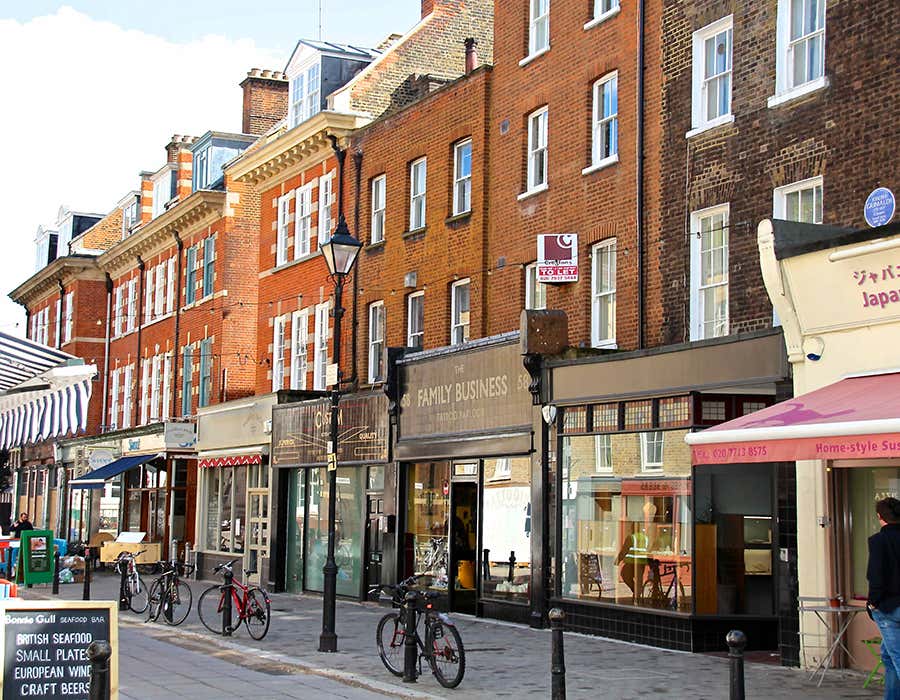 “Yonder is the ‘Devil’s Mile,’ which extends from here [the Angel] to the ‘Cock’ at Highbury, and along which we will steadily make our way. This is not my title; North Londoners themselves have designated it as such. It is an appropriate name, however, for the devil’s imps seem to perambulate through it, both day and night. It’s past midnight, and look at these young girls with their besotted countenances.”

Upper Street, the stretch that connects Highbury & Islington to Angel is a prime example of London’s gentrification. The Devil’s Mile, as it was once called, was a part of the cattle-droving route than ran all the way from Scotland to Smithfield. It was, by all accounts, an area of disrepute; a hub of prostitution, liquor and crime. Dickens went so far as to describe it as “amongst the noisiest and most disagreeable thoroughfares in London”.

While the buzz (and, arguably, the drinking) have remained, the Islington of 2017 couldn’t be more different. Quirky boutiques, restaurants and some of the City’s best interiors shops line both sides of what is now a creative and well-heeled neighbourhood. Like most areas in central London the lower end of Upper Street, by Angel station, has fallen prey to the power of chain stores; the northernmost part, where Malin+Goetz has set up shop, has, thankfully, retained its independence and is home to Islington’s real gems. The borough’s beauty extends all the way into the residential areas of Canonbury and Barbsbury, and down Essex Road where there’s less ‘polish’ but tons of character.

Camden Passage Market
This cobbled side street is home to one of London’s most celebrated and authentic antique markets. If you’re bargain hunting for silverware, retro clothing, quirky gifts or vintage ephemera, the stalls and shops are well worth a visit (and, unlike so many other markets it’s completely free from tacky tourist tat). Alternatively, you can grab a flat white and people watch from the window of The Coffee Works Project.
N.B. Camden passage is not to be confused with Camden Market, which is located in the neighbouring borough.
Camden Passage, London N1 8EA

Union Chapel
Another of Islington’s hidden treasures, this Grade 1 listed building is a working church, a fantastic concert venue and home to The Margins Project, an initiative for those who find themselves homeless in London. As a non profit organisation, every penny spent on the premises goes into the restoration of this unique Victorian Gothic building. Catch a gig there if you can - the acoustics are otherworldly.
19b Compton Terrace, London, N1 2UN; unionchapel.org.uk

Almeida Theatre
A former Salvation Army chapel, the Almeida couldn’t be more different to the glamorous playhouses of the West End. And yet it is anything but ‘fringe’.A slew of Olivier awards for recent productions including an adaptation of Orwell's Nineteen Eighty-Four and Ibsen's Ghosts have finally credited the playhouse with the reputation it always deserved. With only 325 seats it can afford to be far more creative and risky than a glitzy West End production (see 2013’s production of American Psycho, for example).
Almeida Street, Islington, London, N1 1TA; almeida.co.uk

Exmouth Market
It’s a ten minute walk from Upper Street, but Exmouth Market is well worth a visit, if only to feast at the fabulous Moro (or, indeed, the tapas bar next door, Morito). It’s also home to Borough Wines, where you can find natural, organic and biodynamic wines from England and beyond. Should the mood take you, The Family Business, one of London’s lauded custom tattoo parlours, is also located here.
Exmouth Market, Clerkenwell, London EC1R 4QL; exmouth.london

Sadler’s Wells Theatre
“You’ve got the National Theatre for drama, English National Opera for opera and I want Sadler’s Wells to perform the same function for contemporary dance.” These were the words with which Alistair Spalding reintroduced Sadler’s Wells in 2005. In the following twelve years it has cemented that intention with productions from the Paco Peña Flamenco Dance Company, Rambert and Matthew Bourne. An essential visit for fans and students of dance.
Rosebery Avenue, London EC1R 4TN; sadlerswells.com

Written By: Ahmed Zambarakji, award winning journalist and one of the UK's leading Health and Grooming Editors