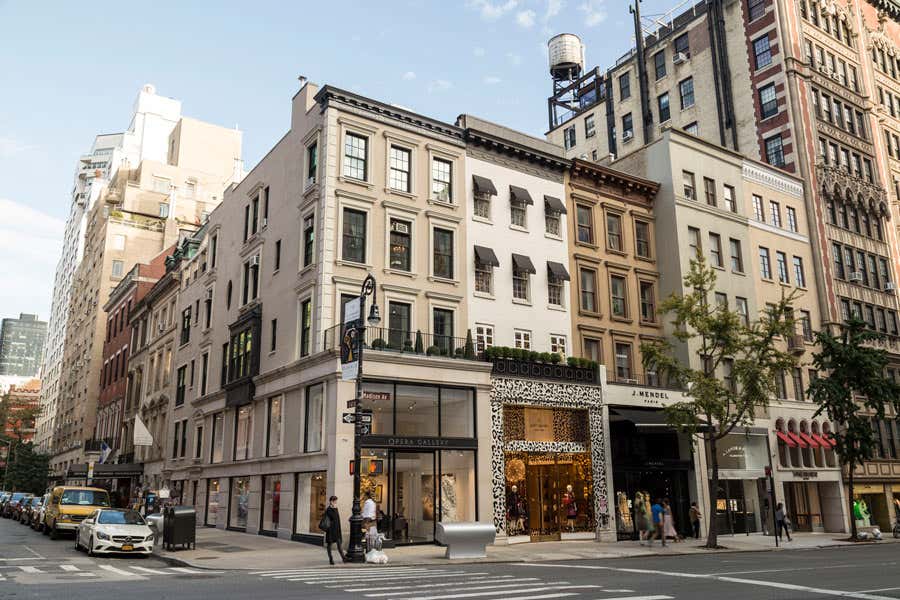 The Upper East Side has evolved quite a lot since Andrew and Matthew first started their careers in Manhattan back in the late Eighties, but its majestic Park and Fifth Avenues remain iconic and you can’t beat Madison Avenue for its luxury boutiques. That said, with Central Park on one side and the East River on the other, this neighborhood is great for exploring by foot. During that walk, dip inside some of these favorite spots of ours.

August 791 Lexington Avenue
The beloved Bleecker Street spot has moved on up to its new home on 61st and Lexington Avenue. Not exactly the epicenter of charm, but the cozy brick-walled boite, overseen by chef Mark Mata, has fortunately retained its West Village charm. The menu offers thoughtful dishes, like hot cornbread with sundried tomato butter, charred caesar salad and seriously yummy shoestring zucchini fries, but the August Burger, enhanced with a rather to-die-for bacon-onion relish, calls to us.

Heidelberg Restaurant 1648 Second Avenue
One of the last historic vestiges of old New York, this classic German restaurant in the heart of Yorkville holds many memories for Andrew, who grew up in Manhattan. Could it be because the beer was served in glass boot vessels? Perhaps, but the menu does not disappoint. “Love the Spätzle, and I have a terrible weakness for a good Wiener Schnitzel,” he says. “And who doesn’t love a good Brat?” So true…

Kappo Masa 976 Madison Avenue
Presentation is on an even playing field with taste in this divine spot tucked next to the swanky Gagosian gallery on upper Madison Avenue. Acclaimed chef Masayoshi Takayama, who sketches out his gastronomic creations on paper towel rolls (!), tempts with unusual dishes, like Tai Truffle Ceviche, Peking Duck Tacos and the very intriguing Seasonal Fish Collar. It’s quite a bit pricier than your casual sushi joint, but this once-in-a-lifetime experience is not to be missed.

Flora Bar 945 Madison Avenue
How many restaurants can brag about their crudite? We’re not sure what they do to their Pickled Daikon and Olives starter, but your taste buds will be grateful. Discreetly situated beneath the former Whitney/now Met Breuer Museum, this chic respite, classic Marcel Breuer decor still intact, attracts art lovers, shoppers, business execs and neighborhood moms. But back to the menu and its other musts: Snow Crab with yuzu kosho mayonaise, and a Green Tomato, Basil and Pine Nut Tart that will melt in your mouth.

Russ & Daughters 1109 Fifth Avenue
The Jewish Museum always has really cool exhibits, but one of our favorites is the yummy eatery downstairs. It is not a quiet place, but who needs to be able to hear, much less need to converse when classics like sable whitefish, deviled eggs and chocolate egg creams are on the menu, arguably the best in the city. Their Hot Smoke/Cold Smoke salmon plate is a clever pairing that should be spread on their excellent bagels. We’d say leave room for the chocolate babka, but that’s what take-out is for. (And we’re not just saying this because the walls are covered in illustrations done by our friend Maira Kalman.)

Bemelmans Bar 35 E 76th Street
Paris has Hemingway’s, Bangkok has Sky Bar, and New York has Bemelmans. With its walls adorned with the eponymous artist’s (Ludwig Bemelman, of Madeline fame) work,  bartenders who make the perfect martini and the high likelihood of a live jazz trio, this lair tucked within the Carlyle will soothe your soul. As Andrew Goetz puts it, “Everything looks good after Bemelmans.”

Ideal Cheese Shop 942 First Avenue
Ideal is old-school New York. It’s been around for more than 60 years and offers more than 250 kinds of cheeses, whether you’re a fan of Manchego, Moliterno or Morbier. The guys behind the counter know their stuff (they also sell olives, cured meats and loads of sundry goods) and are generous with tastings, should you walk in more curious than confident about what type of wedge you want to bring home.

Calvin Klein 654 Madison Avenue
Now that chief creative officer Raf Simons has shaken up this venerable American label in just two short seasons, Calvin Klein’s stately Madison Avenue store has also received the Simon’s touch. Working with conceptual artist and longtime collaborator Sterling Ruby, they transformed the spacious concrete John Pawson-designed space and filled it with rubber-duck-colored paint and wall-to-wall scaffolding. Whether you’re a fan of Raf’s Klein, it’s worth a stop—even if it is to longingly mourn the preceding Costa era.

Barneys New York 660 Madison Avenue
There may be many Barneys locations, but there really is only one Barneys. We’re longtime fans of this place, which deserves a far chic and more stylish name than department store. But we suppose that’s what it is. And what departments! Along with carrying just about every cool designer out there (many of whom we were first turned on to here), its home section has gift ideas for miles and Fred’s, the restaurant across the way on the same floor (9), remains one of the best places for lunching and people watching well into its 30th year.

James Perse 1128 Madison Avenue
Steps from the Metropolitan Museum of Art, this three-story glass cube is full of Perse’s signature soft, relaxed pieces in his also-signature neutral shades. But clothes are just the beginning. The vast space has Perse’s furniture collection, linens (bed and bath) and more Cali stuff like ping pong tables and surfboards.

Vintage Row
Sure, Madison Avenue is lined with every boutique from Barney’s to everyone from Prada, but if vintage is your thing, head east over to 81st Street between First and Second Avenues and step into any of these off-the-beaten-path boutiques. Fancy a boucle Chanel jacket from the Eighties? Or a classic pair of Ferragamo flats? Given the preponderance of neighborhood doyennes, their toss will surely be someone’s gain.

The Roosevelt Island Tramway Second Avenue at 59th Street
For less than a subway fare, the tram offers a rare view of Midtown East and its neighboring island that manages to instill a thrill. Get off and take a short walk south to the still untarnished FDR Four Freedoms Park—one of the last truly meditative spots left in town.

Shock Therapy 153 E 70th Street
The newest workout craze involves a futuristic, muscle-stimulation and an electrode-studded suit in which to do it. The impulses are said to help promote faster metabolism as well as a surge in your sex life, thanks to what those impulses do to one’s nerve endings. Hmmm...